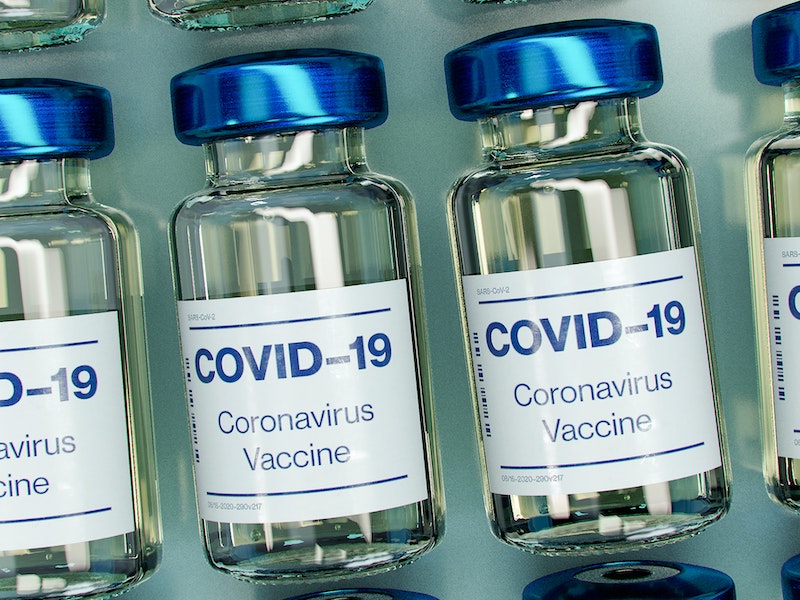 MAGINE MEETING new friends inside a bar. Or sending your kid to school without worry. Going to a concert or a basketball game. Imagine flying without wondering whether a seatmate’s sneeze might send you to the hospital.

A Covid-19 vaccine would help us live our lives again. “We would not have the craziness we have now if we could simply visit a pharmacy and get a vaccine, like we do for flu,” says Maria Elena Bottazzi, PhD, codirector of the Texas Children’s Hospital Center for Vaccine Development in Houston, who was involved with developing a vaccine for the SARS virus and is working on one for Covid-19. It will almost certainly happen: As of early July, there were already 21 vaccines for Covid-19 in clinical trials. “I’ve never seen an effort like this before,” says Walter Orenstein, MD, associate director of Emory Vaccine Center in Atlanta, whose 40-plus years in vaccine policy include 26 at the Centers for Disease Control and Prevention. “It’s going at lightning speed.”

Yet the World Health Organization said in February that a vaccine would take at least 18 months. In June, Anthony Fauci, MD, the director of the National Institute of Allergy and Infectious Diseases and a member of the White House Coronavirus Task Force, revised the estimate to early 2021, and said the U.S. could even have 100 million doses of at least one coronavirus vaccine by the end of this year. Of course, that’s not enough for all of us. And for people whose lives have been completely upended by the pandemic,  it doesn’t sound like Operation Warp Speed—the actual name of the federal government’s Covid-19 vaccine program. It makes you wonder: What  are  the challenges involved? And with over 12 million confirmed cases of Covid-19 worldwide and more than half a million deaths, what can be done to safely speed things along? We asked the experts to break it down.

How do immunizations work?

All preventive vaccines follow the same basic principle: trick the body into thinking it’s the real infection so that the immune system begins to attack it and produce antibodies—blood proteins that neutralize harmful viruses, bacteria, and other pathogens. Because the vaccine is not actually the infection, the immune system is able to dispatch the threat quickly. But the body doesn’t forget about the intruder; it hangs on to the antibodies specific to that pathogen in case it shows up again. In some situations, as with measles, the antibodies stand sentry for most of our lives. In others—whooping cough, for example—the antibodies lose strength within a matter of years, so we need a booster shot. And then there are viruses like influenza, which continually mutate and therefore require us to get annually updated immunizations.

The more people who get the vaccine, the more comprehensive the protection. In what’s called herd immunity, the vaccinated majority are prevented from passing the virus to vulnerable members of the community, including infants and some people with a compromised immune system who can’t be vaccinated. Basically, the virus is unable to get a foothold, and the danger is nullified.

WEAR a mask. Black adults ages 35 to 54 are up to ten times more likely to die of COVID-19 than their white peers, per the Brookings Institution.

How do you make a vaccine?

The short answer: extremely carefully. “Any drug that eventually goes into a human body has to go through a very careful testing process,” says Bottazzi. Scientists must first identify how the body fights the virus so they can create a vaccine that prompts the immune system to respond in the same way.  Then they must test the vaccine in animals to see whether it works and is safe. Next, they put the vaccine through three phases of trials involving thousands of human subjects to make absolutely sure  it works without causing serious side effects. Finally, they present the data to the FDA. If the vaccine is approved and licensed, the FDA oversees its production and determines who should and shouldn’t  get it, how many doses will be required, and on what schedule. Meanwhile, doctors’ offices, hospitals, pharmacies, and public health departments need to order the vaccine, learn how to administer it, and develop systems for delivering it to huge numbers of people.

“It’s not uncommon for this process to take ten years or more,” Orenstein says. Although the timing depends in part on funding, the type of pathogen also matters. Work on a vaccine for HIV, for example, started when researchers identified the virus in 1984 and is still ongoing. Even the fastest vaccine ever made, against mumps, took four years from start to finish. The Covid-19 process aims to cut that timeline in half.

While we wait for a vaccine against the novel coronavirus, it’s  vitally important to stay current with other immunizations. Experts recommend getting your flu shot as soon as it’s available this year; it won’t prevent Covid-19, but it can reduce the risk of getting both viruses at the same time, which would make it harder for your body to fight either one.

Why does the process involve so many people?

Phase I and II trials often test the impact of variables like dose, duration, and schedule of a vaccine on its safety and efficacy, as well as the type and extent of immune response. The third and usually final human testing phase involves randomized, double-blind trials that include many thousands of people—enough to identify possible side effects that may be very rare—and compares illness rates of those treated with the vaccine and those who receive a placebo. Phase III is usually the longest because researchers must wait until a critical number of participants have been exposed to the virus in the community—and develop the disease—to see whether the vaccine worked. The fewer cases there are in the community, the more time it might take to find out if the vaccine was successful. About three in four vaccines that make it to phase III are likely to be approved by the FDA.

How can we speed this up?

Combining trial phases, such as doing phase I and II trials together or beginning phase III before II has ended, is an option some groups are testing for the Covid-19 vaccine. “This entails planning for the next step before you have all the information you need to take it,” says Kathryn Edwards, MD, scientific director of the Vanderbilt Vaccine Research Program in Nashville.

More radically, researchers can skip animal testing and go straight to humans, as biotech firm Moderna  did with its high-profile vaccine candidate. As part of the Moderna human trials last spring, at least three of the 45 volunteers who received a high test dose of the messenger RNA vaccine reported extreme flulike symptoms (however, one of these volunteers has been outspoken in the press about how he doesn’t want his experience to scare people away from vaccines; he stresses the importance of thorough testing during the development process).

The government-led Operation Warp Speed aims to deliver 300 MILLION doses of a safe, effective vaccine for Covid-19 by January 2021.

It’s also possible—but very risky—to expose vaccinated people to Covid-19 in the lab to see whether they develop symptoms. The organization 1Day Sooner, founded by entrepreneurs, researchers, and public health experts, is recruiting people for such a study (if one were to occur). By early July,  they’d  signed up more than 30,000 potential volunteers in 140 countries. One reason why some are willing to be Covid-19 vaccine guinea pigs is that the risk of severe illness and death from the disease is lowest in otherwise healthy young people who have no underlying conditions; even if they got sick, the thinking goes, they wouldn’t be sacrificing their lives for the rest of us. Still, participants can show how well the vaccine works only for their group; we wouldn’t know  right away if it’s as effective for older adults or others at high risk, for example.

Are there other obstacles?

While many factories can make flu vaccines, some technologies for the Covid-19 vaccine will require the construction of new plants, Edwards says. It will also be necessary to configure the distribution channels. Generally, companies cannot  afford to build facilities, order supplies, and train staff for an untested vaccine; if the drug failed, they would risk losing their investment. Recognizing this, the Bill and Melinda Gates Foundation is funding seven factories, each for a different vaccine candidate, knowing that five or six of the efforts will fail. Then there are the often-overlooked challenges of production itself: getting enough of the ingredients and supplies such as syringes. If the vaccine  has to be kept at a specific temperature, there must also be enough dedicated chillers.

There are different ways to trigger an immune response. The following approaches are all being tested as potential Covid-19 vaccine options.

Live-attenuated: Vaccines against measles and mumps contain a weakened (or “attenuated”) form of the germ, which cannot cause disease but will bring on an immune response.

Inactivated: The virus in inactivated vaccines, such as those against hepatitis A and polio, has been killed by heat, radiation, or a chemical like formaldehyde.

Subunit: The flu shot contains only the piece of the virus, usually a protein, that the body identifies as an intruder.

Recombinant: In vaccines for hepatitis B and HPV, scientists genetically engineer a harmless “carrier” cell, such as a yeast cell, to take the antigen—the part of the pathogen that causes an immune response—inside the body. Newer viral vector vaccines use a harmless virus as the carrier.

RNA / DNA: Instead of real antigens, this experimental type of vaccine contains genetic instructions (DNA or RNA) that tell a person's cells to make the antigen. In Covid-19, the main antigen is a spike protein that forms the 'crown' on the surface of the virus. The trick is to ensure that the immune system does not  It attacks the foreign genetic material before the cells can pick it up and the antibodies do not attack the body's own healthy cells, triggering a potentially dangerous autoimmune response. (A messenger RNA vaccine for Covid-19 would be the first of its kind licensed for a disease.)   THWART the  sistema racista de fianza de efectivo contribuyendo a un FUND LOCAL BAIL. Puede encontrar una lista de opciones a nivel nacional en bailfunds.github.io.

It is vitally important to have a diverse group of participants involved in clinical trials of the Covid-19 vaccines, especially given the toll the virus has taken on the black community. Some recent Covid-19 vaccine and therapeutic trials in the United States have involved only 9 percent of black participants, despite reports that black Americans are more likely to die from the virus. Infinite Clinical Trials, a research company outside of Atlanta, is a group trying to involve more blacks; This fall it plans to conduct a Covid-19 vaccine trial, as well as two treatment studies.

Once we find and manufacture a safe and reliable vaccine and make it available to everyone, "it won't be effective until it's given," Edwards says. And that won't be a small challenge. Public health officials are already concerned about the anti-vaccine movement's opposition to this desperately needed protective intervention. If significant numbers of people avoid the vaccine, they will remain at risk of contracting Covid-19, passing it on to others, and keeping the threat alive. "The only real way to achieve herd immunity and community protection is with a vaccine taken by as many people as possible," says Angela Rasmussen, PhD, a virologist at Columbia University. And that's also the only sure way back to normalcy.

Source: O, The Oprah Magazine US