Germans, of Turkish origin and today millionaires: The marriage after the Pfizer vaccine 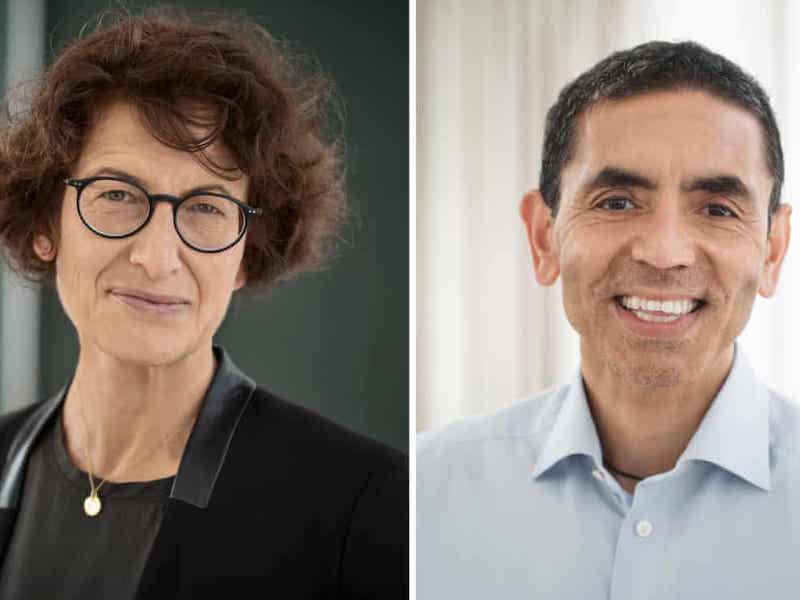 Little is known who are behind the vaccine developed by Pfizer and that it could end the worst pandemic in centuries.

It is about a couple of scientists, both children of Turkish immigrants who moved to Germany in the late 1960s, who founded BioNTech, a biotechnology company that works alongside the American pharmaceutical giant. Ugur Sahin, 55, was born in Alexandretta, on the Turkish Mediterranean coast, but has lived in the European country since he was four years old because his father worked at the Ford factory in the city of Cologne.

Özlem Türeci, 53, is BioNTech's medical director. She was born in the city Lastrup, where her father, originally from Istanbul, worked as a surgeon in a small hospital.

They have both been married since 2002 and their only daughter was born in 2006. According to the Süddeutsche Zeitung newspaper, they met at the University of Saarland when she was in her last year of medicine and he combined his specialty with the classes he taught.

And like good Germans, they are hardworking. They remember that the day of their marriage they started it in the laboratory and that at noon they went to the civil registry to get married. Honeymoon? Nothing. In the afternoon they went back to work.

They founded BioNTech in 2008 with Austrian oncologist Christoph Huber, who still sits on the board of directors. It currently has about 1,300 employees from 60 different countries (more than half are women and a quarter with PhDs) and is valued at US $ 21.9 billion.

And until the virus appeared, the two had focused on fighting cancer with a significantly different approach than conventional cancer treatments.

As they both told the Deutsche Welle chain, since there are no two cancer patients in which the genetic mutation of cancer cells is exactly the same, patients should not be treated uniformly with surgery, chemotherapy or radiation, say the two doctors. On the contrary, each patient needs a treatment specially designed for him.

Thus, says the German channel, Sahin and Türeci, taking advantage of the human body's defenses, seek to develop an immunotherapy that stimulates self-healing mechanisms and uses the body's own strength to make malignant tumors harmless.

From the banks of the Rhine

Since 2001, Sahin and Türeci have their headquarters in Mainz, a city on the River Rhine.

And it was here that they started as entrepreneurs. When they were working at the Mainz University Hospital, the couple tried to set up a research laboratory to study how immune systems might attack cancer cells. However, they were unable to raise funds and "we just started our own company," Sahin said. Thus, her first company, founded in 2001, was called Ganymed. The company became a pioneer in precision antibody therapies against cancer, it was sold to the Japanese pharmaceutical company Astellas for US $ 1 billion in 2016.

Today, the German press ranks the couple among the 100 largest fortunes in the country.

Türeci and Sahin are the children of the so-called “Gastarbeiter” or “guest workers”, immigrants who arrived in Germany in the late 1960s, including thousands of Spaniards and Portuguese.

And this is why the success of both is cause for celebration in Germany. The country has been under great pressure on the issue of immigrants for the past decade, adding to the more than nine million Germans of Turkish origin whose integration has been complicated and stigmatized by nationalist politicians. That is why the case of this couple is described by the German media as a case of exemplary integration and they are almost considered heroes.

In fact, Dr. Türeci herself describes herself as a "Turkish-Prussian." The Berlin daily Tagesspiegel published that her success is "a balm for the soul" of Germans with Turkish roots after decades of being stereotyped for having a low educational level.

“They both founded the BioNTech company. They are married. Has a daughter. They are obsessed with science. Your vaccine is on the way to approval. Their company is based in Mainz, and they both ride bikes to their lab. They are the children of guest workers who graduated from high school in Germany went to universities. Guest worker children who became wiser and smarter than everyone else. That is the fantastic thing about this story. And it has nothing to do with origin, ”wrote Franz Josef Wagner, a columnist for Bild.

According to what they told different German media, such as the Süddeutsche Zeitung newspaper and Der Spiegel magazine, they began working on covid-19 on January 27, a long time before it spread and paralyzed the whole world. The name of the project says it all: “Lightspeed” (speed of light, in English).

"We feel the duty to exploit all our technology and expertise in immunotherapies to help alleviate the emergence of the covid-19 pandemic," Sahin said in a statement in March. That same month, BioNTech announced its collaboration with Pfizer to "co-develop a potential vaccine against covid-19." “It is our technology. Working with Pfizer is an ideal cooperation that allows us to develop a potential vaccine and have it available in the shortest possible time, ”Sahin told Der Spiegel.

“Cooperation is crucial in this global challenge. There is no discussion about whether the vaccine should be available only to China, Germany or the US, ”Sahin also told the Frankfurter Allgemeine Zeitung newspaper. He added that they would not have agreed to work with Pfizer if, for example, they had conditioned distribution exclusively to the US, as President Donald Trump wanted.